The Pete Glavin Cross Country (PGXC) series has brought athletes of all ages and abilities together for regional cross country races since 1990. This Sunday the series came to Taughannock Falls State Park for the first time in its history.

Are you familiar with cross country? Outside Magazine wrote a great article: Four Reasons Why You Should Love Cross-Country. Not only is the sport steeped in history (it’s been around for 200 years), it is physical and strategic. As Mike Nier, the race director, reminds us at each start line announcement, “this is cross country. Every place matters.” It doesn’t matter how fast you are ... it matters what place you finish.

The PGXC web site describes the course as

“Fields by the lake, wide tree lined paths and high walled gorges … running on the first two, the third not so much.”

Many of my training runs are at Taughannock since I live nearby. Due to GPS drift, some of my runs make it look like I’ve scaled the gorge walls. I haven't, though sometimes my quads feel like they have!

The Taughannock course starts on the main field at South Point and makes its way counterclockwise toward the summer concert stage. It wends its way around the lake side of the playground and then re-enters the field briefly before shuttling runners around the marina toward the lakeshore once more. Then the course makes a beeline for the mouth of the base trail, guiding runners along the end of Taughannock Creek and under the Route 89 bridge. The race turns just before the bridge at the end of the base trail (cross country spikes would not fare well on the wooden surface) and returns practically along the same route. The race finishes in the middle of the park after a partial loop around the main field. 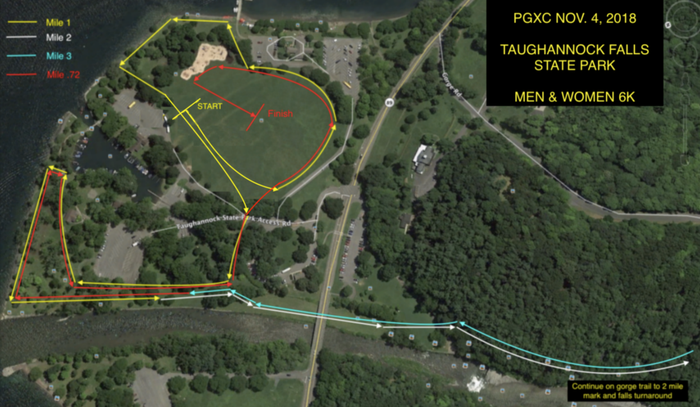 The weather could not have been better. The day before (and the day after, actually) were soggy affairs. Today, the sun shone brightly over glass-smooth water. Those of us who compete in the summer triathlon would wish for a day like today, but alas, it’s not swimming weather anymore. The mid-40s temperature was ideal for wearing shorts while running. 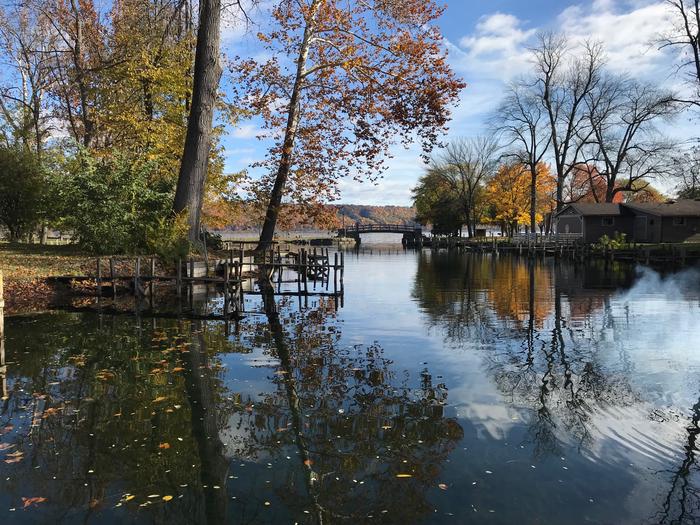 A placid view of the marina

I picked up my race tag in the pavilion by the marina and used the bathroom nearby before going on a warm up run with my team. We ran most of the course casually, map-in-hand, making sure we knew the twists and turns before the actual race. We laughed a bit at the orange-colored flags since they blended into the fallen leaves so well on the main lawn. In the actual race it wouldn’t matter much — only the race leaders really need to know where they’re going! 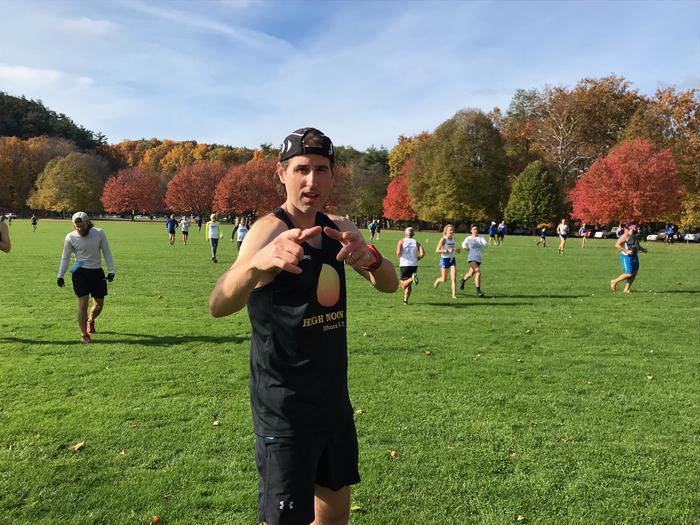 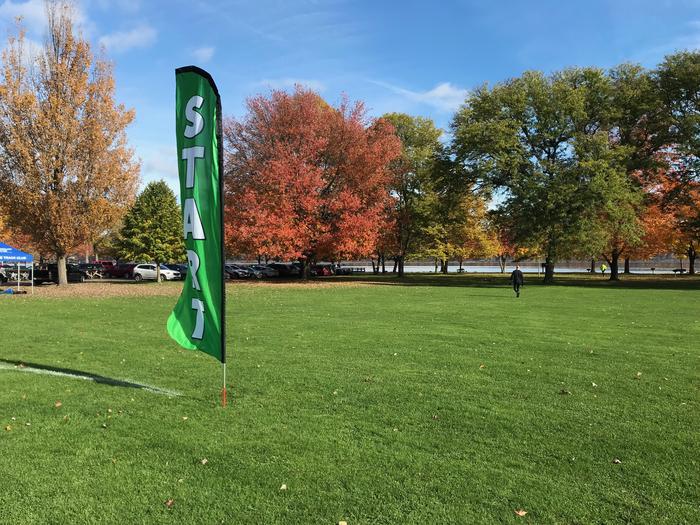 A quiet start line, but not for long

A short time later the clock ticked toward 11 a.m. and 233 runners started to mill about the start line. Teams gathered in tight circles and shouted their trademark cheers. Our own High Noon men’s team and Finger Lakes Runners Club women’s team joined in the aural fray:

Short pre-race instructions guided us to keep the cones on our left for the out-and-back sections, meaning we’d always be on the right side of the path. That was easy to remember! Seconds later we were off, converging from a wide swatch of runners to a narrow group negotiating the first turn. 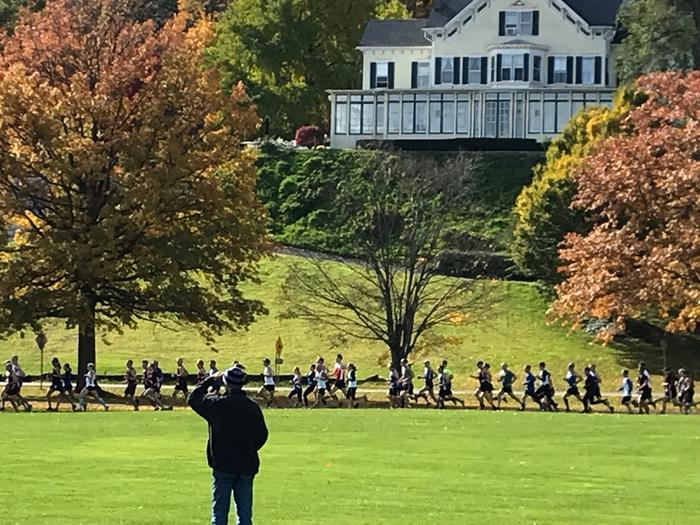 Runners after the first turn of the race

The course was so fun to run. The contrasts were not lost on me as we ran the twists and turns up to the falls. Soft ground vs. hard-packed gravel. Open air vs. gorge walls. Expansive lake views vs. tree-lined trail. It was everything that I love in the park wrapped up into one very quick experience. As I made the final turn toward the finish line in the center of the park, I sensed tension in the runners around me. One of the others also had energy for a finish line sprint so we went for it. We bounded toward the flag-lined finish chute, relishing in the exhilaration and exhaustion of a race well-run. 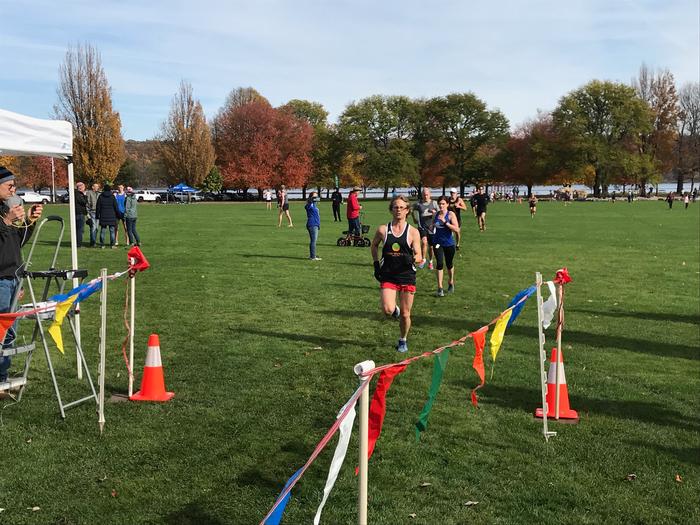 In the end, I was thrilled that our own High Noon Masters team took first place. Plenty of beer and chocolate was handed out as swag to individual and team winners. The true prize, though, is the opportunity to run on some of the most fantastic courses in upstate New York!

I’d like to send a huge thank you out to the PGXC series, to Charlie Fay for expertly laying out the Taughannock course, to Brenda Michaud for the race photos, and to Taughannock Falls State Park for all of their help and enthusiasm for the race. All the runners appreciated the trail closure and the warm pavilion fire! The next and final race of the PGXC series will be November 18 at the Drumlins Golf Course in Syracuse.

Other Posts from autumn

There are 14 other posts like this one. Here are some other recent ones:

Save the Date: First Day Hike

Taughannock's Colors on a Rainy Morning