Trumansburg was first settled by Abner Tremaine (Tremain, Treman) in 1793 after he was given the land for his service in the Revolutionary War. Another soldier, Hermon Camp, settled in Trumansburg after the War of 1812, where he lived in a Greek Revival style house that still stands today on eponymous Camp Street. Throughout the 19th century, the population grew and farmland gave way to a residential community. Trumansburg was recorded as an official village in the town of Ulysses in 1872. Since then, as infrastructure continued to improve, Trumansburg became a popular bedroom to many professionals in Ithaca, including Cornell and Ithaca College. Notable Trumansburg residents include:

Nearby Ithaca is the largest city in Tompkins County. Saponi and Tutelo Native Americans inhabited the area until 1779, when General John Sullivan's troops claimed the land for the United States. The land was divided up as payment to Revolutionary War veterans, who in turn started to farm the fertile land. In the early 1800s, roads and railroads connected the area to other towns big and small. Ezra Cornell, who founded Cornell University in 1868, funded much of the railroad infrastructure to help increase enrollment at the university.

Ithaca has a rich academic and artistic history, hosting engineers and professors at Cornell University and Ithaca College, and playing a pivotal role in the silent film era. Simeon DeWitt, the surveyor-general of New York, named Ithaca after the Greek island Ithaka. If you've read Homer's Odyssey, that's where Ulysses was born.

You can find this plaque at the start of Taughannock's base trail.

Taughannock Falls' overlook is one of the most visited sites in the Finger Lakes. If you've ever visited, you know why. It has a beautiful view of the gorge and waterfall. Today there's a visitor center and a parking lot amid the landscaping and curved pathways (all part of $1.9 million in upgrades in 2015), but there used to be a hotel on the site in the 1800s and early 1900s.

J.S. Halsey built the Cataract Hotel at the overlook in 1850. Sixteen years later, it became known as The Taughannock House after renovations and expansion. Visitors arrived at The Taughannock House by train to either end of Cayuga Lake, and then a steamboat ride to Goodwin's Point (which we now know as Taughannock Point). A stagecoach ferried visitors up the hill to the hotel.

John M. Thompson purchased the hotel in 1872. During this time, several efforts to market the area are noteworthy:

George Freer purchased the hotel in the 1890s, though business started to decline in 1905. Freer left the hotel ten years later and the hotel languished. Investors took over in 1922 with the goal of reinvigorating the property, but a chimney fire changed their plans, burning the hotel to the ground. Two years later, the overlook was purchased by the Finger Lakes State Park Commission.

The Taughannock Man (Tauggy) was discovered in 1879 during hotel renovations and put on display before it was revealed as a hoax. Ira Dean teamed up with John Thompson to create this stone giant using stone dust, eggs, minerals, iron fillings and beef blood. After its "discovery" Cornell scientists deemed the corpse authentic, lending credibility to the story and the draw for tourism to see the artifact.

In 2019, artist Annemarie Zwack, along with Durand Van Doren and Teo Aceto, created a replica of the Taughannock Giant. At July 3, 2021 at 11 a.m., the replica giant was placed in a small pavilion across from Trumansburg's Farmer's Market (map) on a slab of native stone (press release). 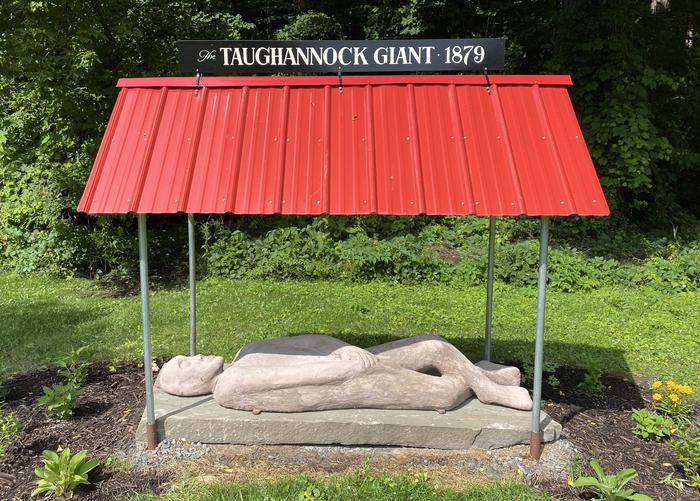 The Black Diamond Express started service on May 18, 1896. It was a fitting name for a train on a route conceived of to haul coal, but became popular by hosting luxury coaches to connect the area with Buffalo, Ithaca, Geneva and New York City. 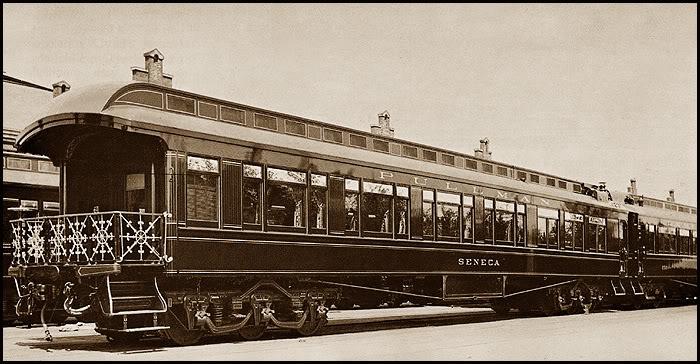 The Lehigh Valley's 315-foot long Black Diamond Express ferried passengers from New York City to Buffalo. The train was known for its speed and onboard dining. Passengers could sit in velvet chairs, mingle in a large well-appointed smoking room and avail themselves of gender-specific lavatories. The last car in the train included a parlor and observation platform, where passengers could look out plate glass windows at the passing landscape. The rails on which the train rode became known as The Route of the Black Diamond. Many newlyweds took this route to get to Niagara Falls, so the train was also known as the Honeymoon Express.

The cities of Ithaca and Geneva had busy passenger stations on this route, and both buildings are still around today. The Black Diamond trail, accessible from the western edge of the park, goes straight to Ithaca along the route of one of the original railroad beds.

Further Reading about the Black Diamond

Weather can dramatically affect Taughannock Creek. In drier times, the falls can almost dry up, yet the creek can flood during massive snowmelt or heavy rains. The park does a wonderful job maintaining the trails and bridges amid these massive natural changes.

The summer of 1935 saw one of the greatest floods of the 20th century at Taughannock. In the late evening on July 7, heavy rains flooded the gorge enough to wash out a bridge and a park pavilion. A mill located more than a mile upstream was also a casualty, being swept down the creek and over Taughannock Falls.

You'll notice that portions of the rim trail are fenced. At the end of the base trail there's also a clearly-marked stone wall that you shouldn't go beyond. This is for good reason, given the geology of the gorge and fragile nature of the walls. Over the years, Taughannock has seen tragedies, both intentional and not. Be safe when you visit!

* In 2012, a court ruled the state of New York was not responsible because she was standing in an area clearly marked off limits by signage.