Tracking a Drop of Water a Thousand Miles 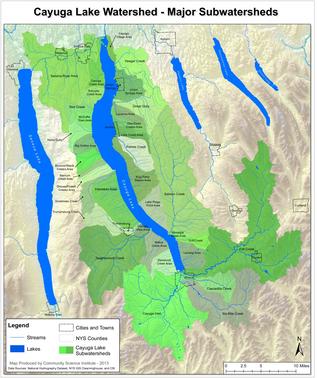 Taughannock Creek is within the Cayuga Lake watershed, a group of waterways that feed the lake from the hills on all sides. As you can see from the watershed map (get a closer look) the water that cascades over Taughannock Falls begins about 10 miles to the west. From there, it begins a long journey to the Atlantic Ocean:

Digging a Lake, Chiseling a Canyon

Two million years ago, this area's landscape was dotted with shallow river valleys. No lakes. No waterfalls. During that two million year span, continental ice sheets and glaciers made their way over the land, gouging deep troughs in the landscape as they retreated. The most recent glacial activity was 12,000 years ago, leaving behind what we call the Finger Lakes. The deep troughs were dammed at the southern end by glacial deposits, and they subsequently filled with the melting glacial ice to the north.

The water was very high during this period of glacial retreat: 600 feet higher than the current lake level. Much of the park would have been underwater, and Taughannock Creek simply flowed right into Cayuga Lake. As the lake level dropped, Taughannock Creek worked away at the shale cliff one stone at a time, creating a spectacular waterfall that has since eroded the 3/4-mile gorge.

The water's flow, coupled with frost and floods, continues to transform the shape of the gorge. During the winter, wet rocks freeze and fracture, causing them to fall from the cliffs at any time. When heavy rains and snow melt cause Taughannock Creek to run high or flood, those rocks, along with mud and other debris, flow into Cayuga Lake. The water dramatically slows as it reaches the lake, causing all that effluent to fall to the lake floor. As you look at a map of Taughannock Park, it's obvious that the delta that we know as Taughannock Point was created thanks to the volume of rocks, mud and debris that Taughannock Creek carried there.

As you look around the gorge, you cannot miss the layers of rock. 380 million years ago, this area was all at the bottom of an ancient sea. The floor of the gorge is a light gray limestone, the evolution of lime mud that was made from algae and other marine organism shells. You can see fossilized remains in the floor of the stream and some of the large stone blocks at the base of the falls. The crumbling walls of the gorge are shale, composed of clay and silt that fell on top of the lime mud and hardened into rock. At the very top of the cliff walls are sturdier layers of sandstone and siltstone.

The ancient sea that covered much of New York during the Devonian period (before the dinosaurs) was slowly filled with eroded sand, silt and clay from the Acadian Mountains to the east. These materials turned into rock from both natural cementing and pressure from material that fell on top of these sediments.

Remember geology class? Chemical and physical weathering? You can see it in action at Taughannock. The limestone in the stream bed is pitted in spots, due to chemical weathering from slightly-acidic rainwater. 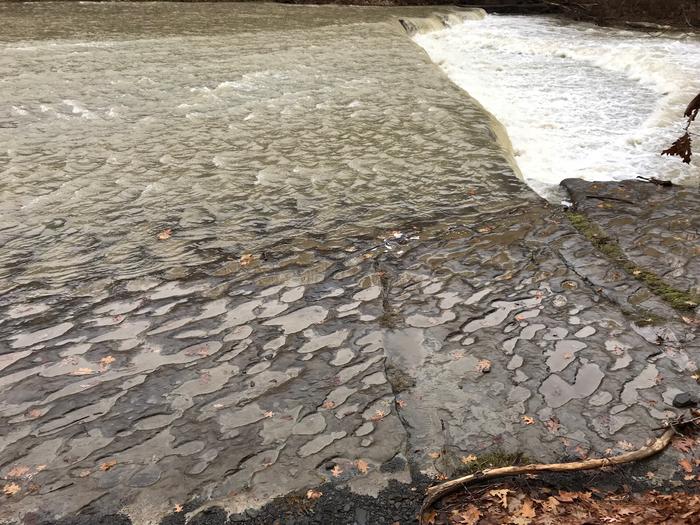 These aren't footsteps in the rock: it's the result of chemical weathering from slightly-acidic rainwater

Freezing and thawing of the gorge walls splits the shale into fragments that eventually fall. That's physical weathering, and it makes climbing the fragile walls extremely dangerous.

Cargill's underground mine. Used with permission.

Would you believe there's a group of miners at work 2,300 feet below the surface of the lake? There is. Cargill's Cayuga Rock Salt Mine is an active salt mine that starts on the other side of the lake and has currently advanced about a mile north of the park. The salt, currently mined for use on roads in winter, was left when seawater evaporated in the area more than 400 million years ago. The salt was subsequently buried by sand and mud that collected at the bottom of the sea.

Let's talk about strong and weak rock. Remember that much of the gorge walls are shale, with stronger layers of stone on top? As the shale erodes under the stronger limestone, eventually the stronger blocks break off and fall, advancing the waterfall slowly upstream. Since the end of the last Ice Age, this slow process has moved the waterfall from the lakeshore to its current location. Every bit of rock that used to fill the massive gorge is now part of Taughannock Point or in Cayuga Lake.

Millions of Years in the Making

Erosion from the ancient Acadian Mountains was deposited into horizontal layers in a shallow inland ocean. The resulting area that covered what is currently eastern North America was called the Catskill Delta. These buried sediments were compressed into three types of sedimentary rocks: 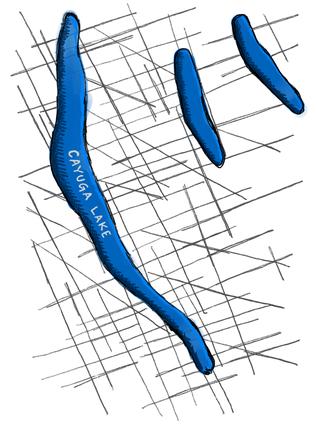 While what we know as Africa was pushing against North America, organic matter under Devonian rock was being converted to methane. The resulting tectonic pressure of the continental collision created perpendicular weak zones in the rock. That pressurized methane found its way into the weak joints in the rock and fractured what we call J1 joints. The African continent was also rotating counter-clockwise, and 275 million years ago, the continental pressure had changed a quarter-turn. Another methane event caused another set of methane-induced fracturing, but this time at near right angles with the original fractures. The resulting joints helped erosion over time, since the rocks were essentially pre-cut, and helps explain a lot of the right angles you see as you explore the gorge walls and eroded rock.

The last glacier to have left this area was thought to be more than one mile thick. When it retreated, it left behind the steep-sided U-shaped valleys we know as the Finger Lakes. The tributaries that feed the lake flowed over the steep valley walls and started the long erosion process that, over the last 10,000 years, has created Taughannock Gorge. In fact, many of the other gorges in the Finger Lakes were created the exact same way.

Since the last glacier departed for points north, Taughannock Falls has eroded its way 3/4 mile back from the edge of the lake. Flowing water plays a role, for sure, wearing away incessantly at rock. Water invariably gets in the J1 and J2 joints in the rock, freezing in winter and expanding 9% as it does. The joints fully fracture, and eventually more water and gravity break the rock off and carry it toward the lake. 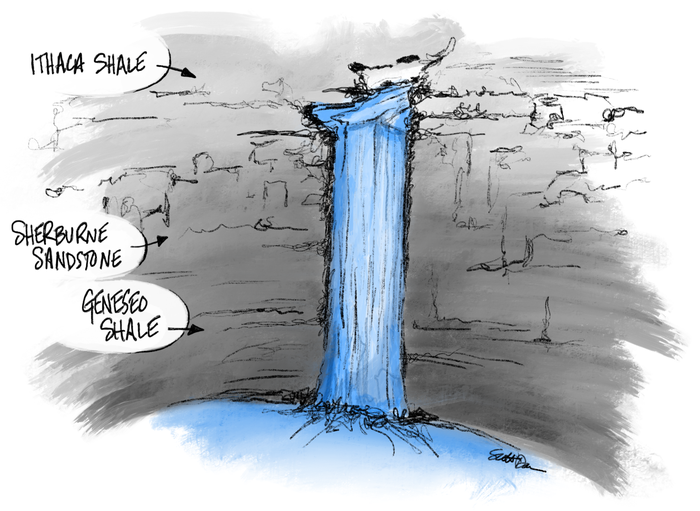 Geneseo shale erodes easily and helps maintain Taughannock's overhang. Shale erosion leaves the sturdier Sherburne sandstone above unsupported and vulnerable to breaking and falling. There are tons of large, rectangular sandstone blocks at the base of the cliff. They used to occupy a loftier perch, and eventually will be carried downstream.