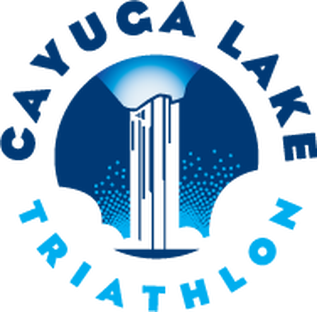 If you're looking for a sprint or intermediate triathlon, look no further than the Cayuga Lake Triathlon. This well-organized event is one of the cornerstones of the Taughannock's summer calendar. Started in 2002, this race has a really positive vibe and feels like a community event, from the start of the race to the end of the massive post-race party.

The excitement starts the night before as event fencing goes up prior to one of the summer's later concert series shows. Concertgoers sit amidst the buzz of a massive event slated to ramp up in the next day's pre-dawn hours. What isn't evident is the year-long effort that culminates in this race. It takes a veritable army of coordinators and volunteers to pull it off.

You’ll begin the race with a swim in one of the crown jewels of the region, the refreshingly cool waters of Cayuga Lake. You’ll bike along scenic rolling hills with spectacular lake views. You’ll finish with a run near the shore, through the shaded and magnificent gorge trail to Taughannock Falls, the highest water fall in the Northeast at 215 feet. Cross the finish line with cheering crowds and a bevy of volunteers ready to serve a variety of delightful treats. Race as an individual or on a relay team and see for yourself why Cayuga Lake Triathlon is one of the premier triathlons in central New York. It’s a very well organized race with fantastic volunteers and spectators, all within the heart of one of the most spectacular New York State parks. – cayugalaketriathlon.org

As a spectator or competitor, you won't be disappointed. You can watch the action all from a central location, seeing athletes begin and end their swim on the waterfront, run into transition on the great lawn and bike up and out of the park on Route 89. Cyclists scream back into the park area after descending the massive hill's final mile into the park, transitioning once more for a run around the periphery of the shoreline, under the Route 89 bridge, and along the base trail to Taughannock Falls.

The energy of this day is palpable: come join in the fun!